Refugee With An iPhone 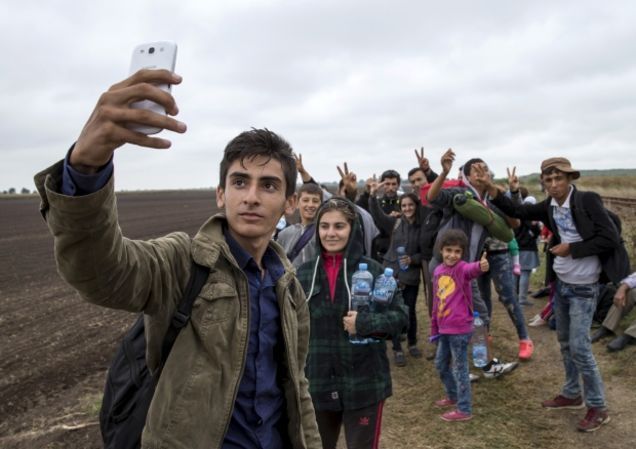 I had a house and a car and a job
Before the secret police, the riots and bombs
But it's safer to be where the bombs all come from
Than the city on which they are falling
So I gave a man all the money I had
In exchange for a space in the back of a van
And all that I had in a bag on my back
Was my phone and a few bits of clothing

Is it a sign that I'm radicalised
If I don't want my wife and my daughter to die?
I've seen the fear in a little one's eyes
That her daddy soon will be taken
So I call her now at the end of most days
To tell her I love her, tell her I'm safe
And we both send pictures of our scariest face
And she holds the phone while she's sleeping

Refugee with an iPhone, exposing uncomfortable truth
We can't bail out the bankers and afford to look after you too
Cos bankers have friends so high they own the Sun and the Sky
And refugees just like iPhones never take too long to die

In January '48 Steffie arrived
From the wreckage of Austria to build a new life
Practiced her english late into the night
Reading out loud from the papers
Married a soldier, a practical man
He built a home for them with his own hands
Raised children and chickens and took any job
And one of her children is singing this song

I can't remember who it was (probably just as well) or where it was, but I remember seeing the news reports and someone said to me “if they're poor refugees, how come they all have iPhones?” I've had some contact with refugees so I tried to answer their question. But I think I've answered it better here. Verse 3 is true though it's hard to be totally literal in summing up a life in 8 lines.

Here's another take on the issue from The Independent