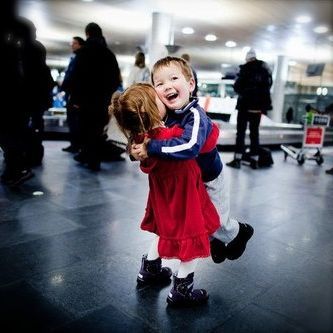 We're rootless and artless and freer than birds
A left-field love song. Theremins and Spitfires, airports and abattoirs...

But we're rootless and artless and freer than birds
Let's not march to the abattoir just like the rest of the herd.
Forget Stansted, forget JFK.
There's a whole world of difference between a runway
And running away.
We're not running away...

Doesn't the sunset attract you? Don't the horizon look grand?
Couldn't you just catch that burning ball in the fist of one hand?
I'll clear you for take off and you can clear me
Then we'll cross every ocean and be back for our tea

Let's Build An Airport was written during FAWM 2011. In keeping with the rough and ready vibe of that songwriting challenge I wrote it from scratch and demoed in a single night.

The original inspiration was simply a list of bizarre children's books that I'd seen in a school library on a break from teaching. I had intended to do a surreal list song, but I never got beyond the first title “Let's Build an Airport” by Kath Mellentin and Gillian Clements.

I just spilled out my frustration over a descending chromatic chord progression that has been done many times before (e.g. 'If' by Bread and Stairway To Heaven). But switching off my inner critic seemed to be a good thing and I'm really proud of some of the phrases and imagery – 'As deep as the clouds', 'rootless and artless and freer than birds' and catching 'that burning ball in the fist of one hand'. Though the song is using a commercial airport as a metaphor, in my mind's eye I see Lancaster bombers taking off when I hear the song, so I was thrilled to get some sound library recordings of a real life WW2 bomber crew and in my mind Rachel McClean's cello is almost the musical representation of a Lancaster bomber – heavy, yet elegant and quintessentially English.

Here's a video of one of the first ever public performances at the London 'FOP' (FAWM Over Party) in 2011.