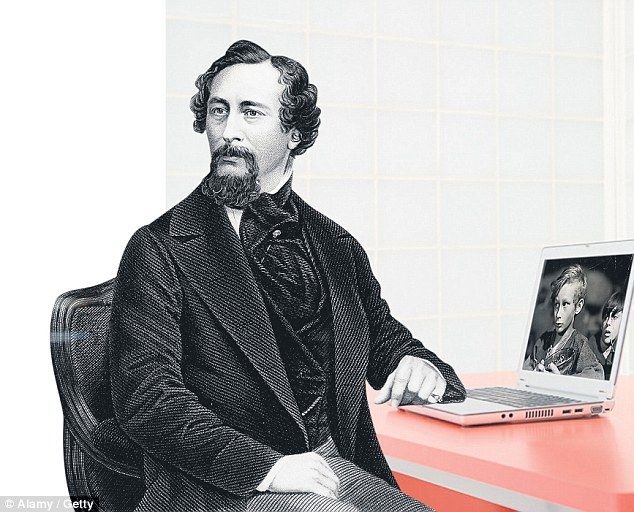 With downloading we listen to everything in bits. Could you imagine what Charles Dickens would say if you said, ‘Could I just have one chapter?’ You’re creating a short story culture. What happened to narrative?

I love that quote from Tori. So wise. So perceptive. So wrong. The truth is that one of the greatest English novelists did in fact publish full length novels like Hard Times, A Tale Of Two Cities and Great Expectations in weekly instalments. In his own way his creative strategy was a precursor to the digital downloads and the ethos of constantly releasing new 'content'. In other words, if Dickens was a 21st century musician he'd be releasing his albums a song at a time as digital downloads. Dickens' example helps to confirm my belief that great art is often created by people who are not preoccupied with making great art. Think of Bach having to come up with a new piece every Sunday for the church service. Or the Beatles cranking out a new record every three months for Parlophone. Or Motown literally modelled on that shining beacon of creativity, the Detroit car manufacturing industry. Or Dickens (and Conan Doyle, Tolstoy, Dostoevsky, Flaubert, not to mention Melville, Eliot, Hardy, Trollope, Thackeray and Beecher Stowe) producing the paper equivalent of a weekly soap opera. But to say Dickens published in instalments doesn't give us the full picture. Dickens didn't just complete a novel and then drip feed it to the public. He wrote them as he went. It's normal to read a novel not knowing how it's going to end. It's more unusual when you realise that the author might not know how it's going to end either! But it gets better than that. When Dickens published The Pickwick Papers and Oliver Twist in monthly instalments, for ten months he was writing both at the same time! Three months after finishing The Pickwick Papers he started writing (and publishing) Nicholas Nickleby even though he was still working on Oliver. He only started to get ahead of schedule on Oliver after signing a publishing deal for the finished novel a few months before the serialisation was completed. Publishing as you go has some benefits.

Deadlines are your friend

I'm a fan of deadlines . Dickens' writing commitments kept him sharp and made him prolific. Writing without “time to reconsider, to change [his] mind, to go back, to cancel, to rewrite” sometimes delivering the chapters to the printers at the very last minute, it killed any chance to second guess himself and succumb to the paralysis of analysis. It was incredibly hard work. He pushed himself even harder than he needed to, working “furiously fast to give himself free time. He lived hard and took hard exercise. His day began with a cold shower, and he walked or rode every day if he could”. He was suspicious of taking too long a break from writing saying “I feel it better and wiser to keep near my oar”. At the risk of stating the obvious, constantly working is the best way to improve at your craft. And nothing makes you work like a deadline. In his biography of Paul McCartney Barry Miles writes

The speed of artistic creation varies enormously from artist to artist...but all would agree that the printer's boy waiting in the hall, a one-man show in six months' time or a block booking of a recording studio in three weeks' time exert a powerful influence on the creation of art.

Nothing primes inspiration more than necessity, whether it be the presence of a copyist waiting for your work or for the prodding of an impresario tearing his hair... I wrote the overture to La Gazza Ladra the day of the opening in the theatre itself, where I was imprisoned by the director and under the surveillance of four stagehands who were instructed to throw my original text through the window, page by page, to the copyists waiting below to transcribe it. In default of pages, they were ordered to throw me out the window bodily....

Publishing as he wrote meant Dickens was in constant contact with his audience. The feedback from those reacting to his work allowing him to make adjustments 'in real time'. Stories changed shape in the process. The Old Curiosity Shop grew from a collection of short short stories into a full length novel due to financial pressures on the magazine Dickens was editing. Biographer Claire Tomalin says “[By April he was improvising] from week to week a novel he had not even thought about in January.” In David Copperfield there is an unpleasant character called Miss Mowcher who is a dwarf and beauty specialist. Mrs Seymour Hill, a female dwarf and chiropodist (and neighbour of Dickens) threatened to sue for defamation. To escape a lawsuit Dickens offered to change the plot and transformed Mowcher into a sympathetic character. Not everything we try will work and sometimes (especially with larger scale works) it might be a good idea not to spend three years working on something before you find out whether it's any good...

Dickens also got feedback from reading chapters aloud to his friends which “lifted his spirits” and gave him intense pleasure “nourishing his belief in himself and helping to carry him through … pain and unhappiness.” In this he stands in a long tradition of mutually supportive schools, movements and artists collectives from the Inklings and the Bloomsbury Group to Jack Hardy's Songwriter's Exchange (the inspiration for First Tuesday). Wizard Of Oz lyricist Yip Harburg was part of another New York artists group

Starting in the 1920's, and continuing through the 1930's] we got together almost every night, often at the Gershwins, where there were two pianos, and we could play everything we had written that week and see how it went over. The others gave you criticism or an idea – there was a real camaraderie. People took fire from each other. It was like the days of Samuel Johnson and Fleet Street. We all wrote for each other and inspired each other. You wanted to come up every week with something worthwhile. We were all interested in what the other fellas were doing. Sometimes you would hear the whole score of a show before it opened. We ate it up, analysed it, as the composer played it over and over at the piano. There was a kind of healthy competition among us. You would not dare to write a bad rhyme or a cliched tune. We had such great respect for each other's work, and the integrity of our music and lyrics. The give and take added to the creative impulse. It was an incentive, it opened up new ideas, and made it necessary to keep working.

Sources: Charles Dickens: A Life by Claire Tomalin, Paul McCartney: Many Years From Now by Barry Miles and Fascinating Rhythm: The Collaboration Of George And Ira Gershwin by Deena Rosenberg