Three Chords And The Truth: The Importance Of 'Fact Checking' Your Songs 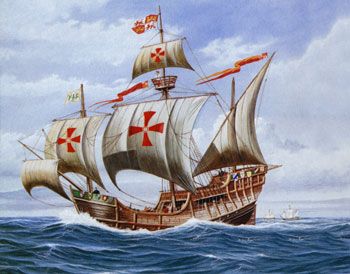 Many years ago, I heard that legendary guitarist Ry Cooder was going to be doing a live taping at BBCs White City studios. As my sister lives nearby I felt we had a shot of getting a tape right into his hands. I had decided to write some old-timey lyrics to Joseph Spence's tune Great Dreams From Heaven, a tune Cooder had cut as an instrumental, and I was sure my lyrics would knock him out. They opened with the discovery of America, moved to Martin Luther King and finished with a heartwarming call to believe in your dreams. I recorded my vocals over an edit of Cooder's track, typed up the lyrics and sent my sister to deliver the payload. When my sister reported back she dropped a bomb of her own - “You know the Mayflower wasn't Christopher Columbus' ship..?” My opening line was

“What! Tell me you didn't give him the song!” But she did. My imagination flipped between two scenarios. Ry opens the package, reads the lyrics, sneers and throws the tape (unlistened) into the bin. Or Ry opens the package, reads the lyrics, sneers and says “hey guys, get a load of this idiot!” The band all laugh as Ry throws the tape (unlistened) into the bin. Over twenty years later and I still cringe. Should I ever get the chance to meet one of my heroes I'd be tempted to pass. I don't think I could face hearing “Hey, weren't you the guy who...”. A song needs to be true. Does that mean there's no place for poetic license? Not at all. Generalisation and hyperbole are fine. The Beatles can sing All You Need Is Love without discussion on Maslow's hierarchy. But a song should be factually true, true to the one singing it, and true to the metaphors and grammar of it's genre.

Get Your Facts Straight

Stephen King in his book On Writing says that once he's written a first draft he asks people who have expertise in a particular area to fact-check his manuscript. Types of guns, police procedure, geography etc... It's important because glaring errors make you look dumb and take knowledgeable people right out of the book (or song). When you're trying to make a serious point a ridiculous error can cause a mental trainwreck. From This One Place by Sara Groves includes the lines

The improbability of a cardinal moving way beyond its normal repertoire of a one-note chirp to improvise a beautiful song makes me wonder whether anybody tried to suggest a more appropriate species of bird before letting her go ahead and freight a decent song with unneeded controversy.

It would have been easy to check with a bird lover. Research shouldn't interrupt the process - write what you like and check it afterwards (novelist Ann Patchett suggests this approach). Occasionally if it's integral to the whole structure of the song do all you research first and then write the song. Here are some of the things I've had to double check

At other times you just need to step back and think. The original line in Trees was “All of your dreams will be forgotten like Autumn leaves when Spring appears” I was so caught up in the clever double meaning of 'autumn leaves' that I forgot - Winter comes after Spring!

Get Your Imagery Straight

Factual goofs should always be fixed but a song also has to be true to it's imagery and metaphors. Taylor Swift's I Knew You Were Trouble has

A new notch in your belt is all I'll ever be

Songs should be true to the 'character' that is singing them. In My Fair Lady the song Show Me has the line

but the song is sung to an upperclass Englishman by an uneducated English woman singing who is learning to speak 'the Queen's English'. And English people say Autumn. Americans say Fall. Stephen Sondheim says complex rhymes imply thought and education. This is true even of songs that aren't in musicals. An overly clever rhyme in a straight ahead pop song sticks out like a sore thumb

It's no good. He sees her. He starts to shake, he starts to cough. Just like the old man In that famous book by Nabokov

Just like a dumb rhyme sticks out in a clever song

Told me love was too Plebeian Told me you were through with me an' Now you say you're sorry...

Get Your Grammar Right

A song needs to be true to the genre's standard of grammatical correctness. Double negatives like “You Ain't Goin' Nowhere” are fine in folk and Frank Zappa can get away with “chances are they might not never find one no more” for comedic effect. The same goes for contractions. If you 'got' the blues you can “gonna, woulda, coulda” all you want. No one in their right mind thinks the Beatles would be better singing

On the other hand, hymns requires correct english, but archaic language is fine and thou the syntax reverse thy canst entirely. But no genre allows you to mix and match approaches just to preserve the rhymes and scanning.

You Killed My Song. Prepare To Die.

Sometimes a song is broken beyond repair. I had one which started “Beautiful Cross, strange contradiction”. My friend Steve pointed out that calling an instrument of torture 'beautiful' isn't a contradiction, it's an oxymoron. “Beautiful Cross, strange oxymoron”? The song was dead in the water - I scrapped it. No one wants to be Alanis Morrisette (I'm being ironic). Imagine having to spend your life justifying your misuse of a common word (“I was employing situational irony in a Kierkegaardian sense”) or put up with people 'correcting' lines like

We all need Inigo Montoya's in our lives. People like Steve who will tell us, “You Keep Using That Word, I Do Not Think It Means What You Think It Means”

Other stuff
Do You Have To Suffer To Produce Great Art?
Writing Songs With Stephen King
The Big Fat Lie Most Musicians Believe
Three Things Every Musician Should Be
The 'To Do' List - A Classic Songwriting Tool